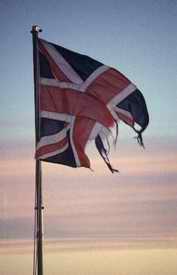 Euroscepticism in Britain has long been the foil of diplomatic strategists across the Irish Sea.  Those charged with the navigation of grand strategy are conscious of Britain's place in the world, her diminishing military status, but relative cultural strength.  Similarly, her proximity to Europe, and increasingly well integrated elites across the continent (and not just through royal marriage!) present an opportunity for Britain to be a bridge for both Americans who only speak English, and for the Chinese who have decided on English as their standard second language.  In order to take advantage of that opportunity, Britain needs deeper ties to Europe, where she can exercise not insignificant clout, and even leadership, should she decide to.

At the same time, there is a kind of selective amnesia that the country has been experiencing, perhaps in an attempt to distance itself from the horrors of the second World War, when Britain was truly defeated in the Winter of 1940.  Churchillian rhetoric aside, Britain was devastated.  Her factories were destroyed, her spirit splintered, as the overwhelming power of the Luftwaffe crushed the country. Britain was the beaten fighter, bruised, bloodied and broken, spitting through cracked teeth at the opponent 'Is that all you got?'  The Summer of 1941 brought with it the respite of the Eastern Front, and later that year the American intervention after Pearl Harbor brought further defences to Britain's aid.  Eventually the country began to rebuild, though its position at the top of World Affairs was over.

Today, people remember that time with great fondness.  The Great Escape constantly features on lists of great movies.  Soft soaped TV Shows further contributed to this kind of selective memory loss, with people remembering the good and blocking out the bad.  At the same time, a kind of cultural reactionism was allowed to fester in the post-War Britain, right up to the race riots in the 1970's and 1980's, and massive problems in football hooliganism in and around the same period.  Part of this was caused by economic deprivation, but some of it was a by-product of this cultural nostalgia, and a sense of loss. One report noted that ‘The future of hooligan gangs and the form which there violence will take is substantially determined by the common values upon which they agree and which they establish through their public affirmation of shared memories.’ One academic referred to the "centrality of nationalism and masculinity to the fans' identity and, therefore, to the disorder in which fans are sometimes involved."

In the fantastically titled Advertising the Archive: Nostalgia and the (post)National Imaginary, Paul David Grainge considers the concept of nostalgia without memory, one created by advertising.  He describes some of the Apple and GAP advertising from the 1990s that invoked public living figures such as Mohammed Ali and Bob Dylan, and in Apple's "Think Different" and Gap's classic campaigns, notwithstanding the fact that Apple's products had no place in memory, while Gap's clothes were based on a constructed image.  Both advertising campaigns were black and white, emphasising the nostalgia associated with the message.  The British national identity today held by many appears similarly detatched from a substantial memory, a fabricated post-colonial structure.

This Euroscepticism in turn is on the one hand reflective of this wholly invalid politico-cultural identity, an inflated view of Britain's true place in the world, and some misguided belief that separatism will make Britain stronger.  On the other hand, it is fuelled by Union Jack wielding populist politicians, joined in their myopia by a reckless disregard for history.  David Cameron's defeat in the Commons in advance of European budget negotiations is a further reflection of this persistent trend, that successive governments did not manage well.  It is a failure of leadership, and needs to be tackled in an intellectually hones, and politically committed way.  The trouble is, of course, that if it backfires, then oblivion beckons.  And that's an incentive for no politician, even the Liberal Democrats.
Posted by Ballinteosig Library at 11:24 AM